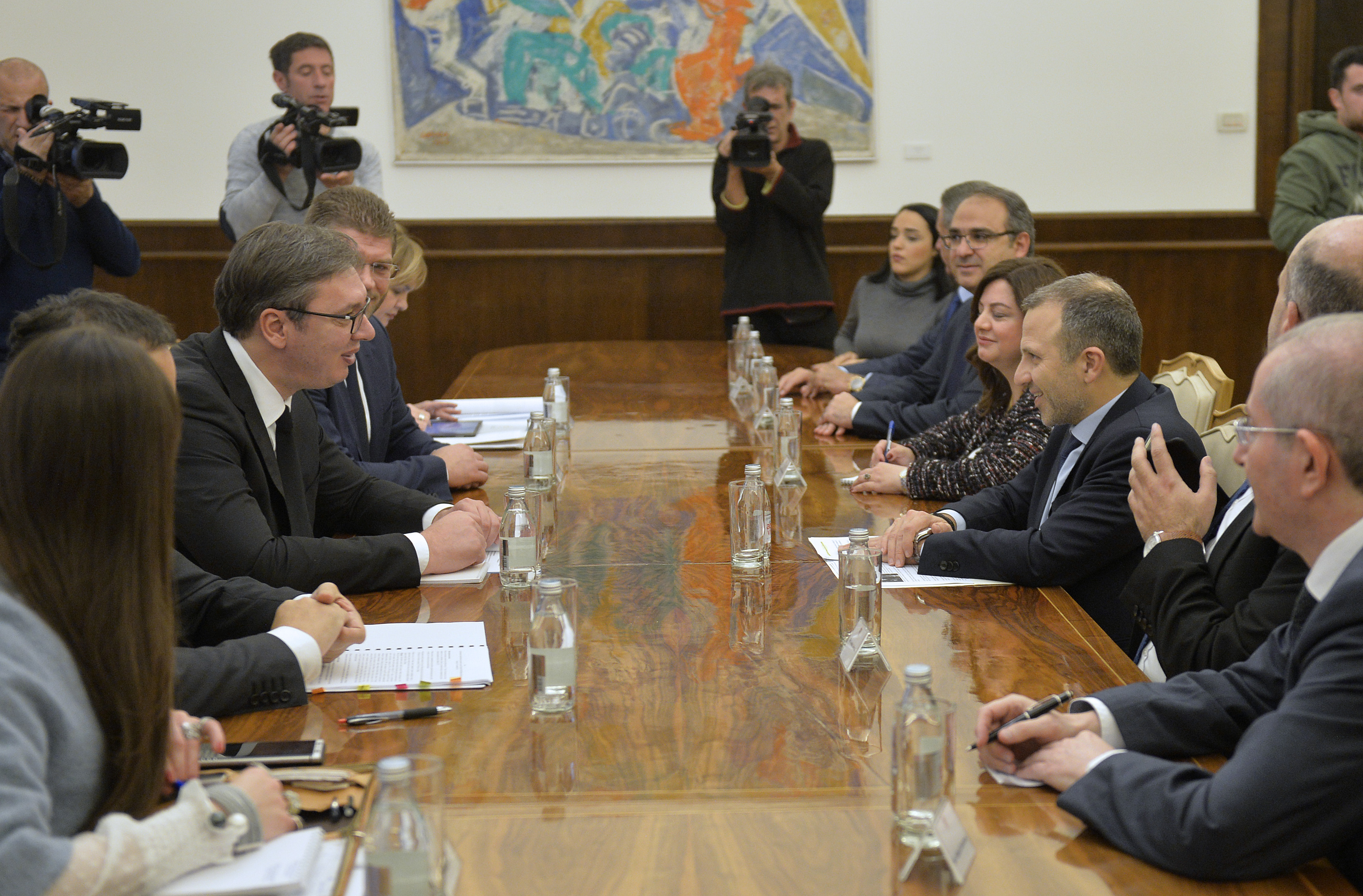 Source: www.diplomacyandcommerce.rs – Lebanese caretaker Foreign Minister, Gebran Bassil said he recognized Serbia as a viable economic partner and praised the government for having the political conviction to overcome Serbia’s economic challenges. ‘Serbia had the courage to lower salaries for the public sector,’ said Bassil. ‘Lebanon is increasing salaries in a way that the budget cannot bear, which is part of the (our) economic decline,’ he added.

Among the items on the diplomats’ agenda were further opening Serbia’s markets to Lebanese products and creating ways to raise the level of awareness in potential economic opportunities between the two countries. To that end its being proposed that the Chambers of Commerce in Belgrade and Beirut should establish direct contacts between businessmen of the two countries in order to increase the current modest levels of trade and economic cooperation.
The Lebanese delegation included the President of the Investors Union, Jacques Sarraf, the Beirut Traders Association President Nicolas Chammas and Agriculture Ministry Director-General Louis Lahoud, as well as consultants from the Foreign Ministry.

The President of the Serbian Chamber of Commerce, Marko Cadez said the two countries had much to offer and told the delegation that Serbia was open for business. ‘Lebanon’s entrepreneurial skills in business success are well known throughout the world and Serbia is a reliable partner. We are ready to work together,’ he said.

Jelena Sadler is the Director of the Serbia Lebanon Business Council (SLBC) in Belgrade. The council was established in 2017 to serve as bridge to help promote and strengthen economic ties between the two countries.


How important was the visit by the Lebanese delegation to Serbia?

Extremely important. The former Yugoslavia had a strong presence in the Middle East and many Arab countries are well aware of that. Arab investments in Serbia from the UAE have drawn attention to investment potential in Serbia and the Lebanese delegation recognized that too.

Why did you start the Serbia Lebanon Business Council?

Having spent part of my career as a producer for CNN I witnessed the devastating effects of conflicts in Lebanon and the former Yugoslavia. We identified the possibilities of boosting economic interests between Serbia and Lebanon almost two years ago. Having lived for ten years in Lebanon I felt the time was right to start building a vital economic bridge through the business council. That bridge is now well and truly open.

What is the role of the Serbia Lebanon Business Council?

The two countries have so much in common, especially their desire to rebuild their economies. They have much to learn and gain from each other from cooperation on many levels. The council facilitates and expands economic and industrial cooperation between Serbia and Lebanon by an exchange of information on economic, commercial, and industrial matters. This includes information on specific opportunities available in both countries that could help expand trade and business through their respective members. The SLBC will encourage, promote and facilitate effective commercial cooperation between Serbia and Lebanon in the areas of trade, investment, tourism, technology transfer, and related economic and industrial activities. This is achieved by establishing effective communication between member companies with particular reference to the private sector with guidance and assistance from the SLBC.

How is the SLBC formed?

The Serbia Lebanon Business Council offices are established in Belgrade. It is officially and legally established in association with the Chamber of Commerce and Industry of Serbia (CCIS) and the Chamber of Commerce, Industry and Agriculture of Beirut and Mount Lebanon (CCIA-MBL) and to this effect, Memoranda of Understanding were signed in Belgrade, Serbia and in Beirut, Lebanon.

How does the Serbia Lebanon Business Council Function?

The council exists to promote and strengthen economic cooperation between Serbia and Lebanon, and comprises members from both countries. SLBC members have unique and high-level access to relevant commercial activity in Serbia and Lebanon enabling them to identify, create, and develop successful business opportunities. Through the SLBC, both countries have established an “information network database” to make all information available in one place. In this way, the SLBC serves as a one stop shop for all members from both countries, facilitating their communication and exchange of information.

What are the next steps in developing closer economic relations between Serbia and Lebanon?

The official visit was a vital first step at the level of government to government. It was agreed that in May 2019 a presentation of Lebanese products will be made in Belgrade and a high-level Serbian delegation is expected to visit Lebanon, also in the first half of next year. In addition, a Memorandum of Agricultural cooperation will be agreed and signed early in the new year. The more Lebanon understands what Serbia has to offer and vice versa the better. This is a new and important horizon for businesses in Serbia.