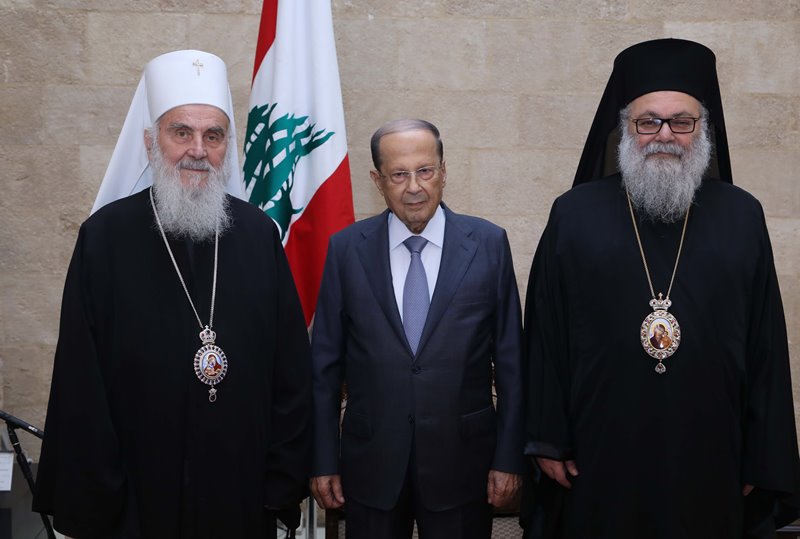 NNA – President of the Republic, Michel Aoun, stressed Thursday on the deep relations linking Lebanon and Serbia together and the similar sufferings of both the Lebanese and Serbian peoples, hailing the efforts undertaken to further boost and strengthen the friendship and solidarity ties between both countries.

“In Lebanon we are living together, Christians and Muslims, and as Christians we are always working to maintain balance especially in wake of our difficult circumstances resulting from the war in the region, which aims at the elimination of large groups and the destruction of entire areas,” Aoun affirmed.

The President’s words came during his meeting at Baabda Presidential Palace this afternoon with the Patriarch of the Serbian Orthodox Church, Irinej (Gavrilovic), accompanied by Greek Orthodox Patriarch of Antioch and All the East, John X Yaziji, and a delegation of prominent religious clerics. Also attending was State Minister for Presidential Affairs Selim Jreissati, National Defense Minister Elias Bou Saab and Justice Minister Albert Serhan.

“Our Christian teachings only carry us to spread love and kindness among people,” said Aoun. “Those who read the Gospel and the Epistles of St. Paul cannot but achieve this universal message among various sects and religions,” he maintained.

“There are neither any boundaries nor barriers between Christians. It is true that there are different Christian doctrines, cultures, customs and traditions, but there is only one Christ and one Bible, and the law of love is solely capable of establishing peace and justice across the world,” the President emphasized.

In turn, Irinej thanked the President for his warm reception and kind words. “We have come for a visit of peace, such peace to which we look forward together, one that the whole world yearns for,” he said.

“There is nothing more wonderful than having the same people live together as brothers, for this is the most joyous act because the Lord asked us to live in peace as brethrens with all communities,” the Patriarch added. He regretted to see that human beings today are doing their utmost to distance themselves from real peace, which has triggered so many problems and increased pain.

“Our homeland has passed through difficult times and wars similar to those witnessed in Lebanon. But hope remains to overcome and forget the wounds of the past, and to look forward to building peace in our nation and in all countries of the world,” the Serbian Patriarch emphasized.

“It is my second visit to your beautiful country…The Lord has given you a home for joy, and the fulfillment of joy depends on man,” said Irinej. “I am carrying a message of love and peace from the Serbian people, and we are eager to consolidate the relations between our two peoples, hoping that you would visit our homeland since our people harbor the best feelings of friendship and affection for the Lebanese and Syrian peoples for many years,” he assured.

The Serbian Patriarch confirmed the importance of working for peace and putting an end to wars, stressing that pursuing wars will only lead to the destruction and annihilation of humanity.

For his part, Patriarch Yaziji highlighted the importance of Patriarch Irinej’s visit to both Lebanon and Syria, particularly under these difficult circumstances.

He underlined the importance of the close relations between the two Orthodox Churches in Antioch and Serbia. “The Serbian people have suffered as much as we have, and we continue to deepen our understanding of each other as a result of similar circumstances,” Yaziji added.

At the end of the encounter, the Patriarch of Serbia offered President Aoun the Patriarchate’s emblem and an album about Serbia while Aoun, in turn, presented him with a souvenir gift token from Lebanon.